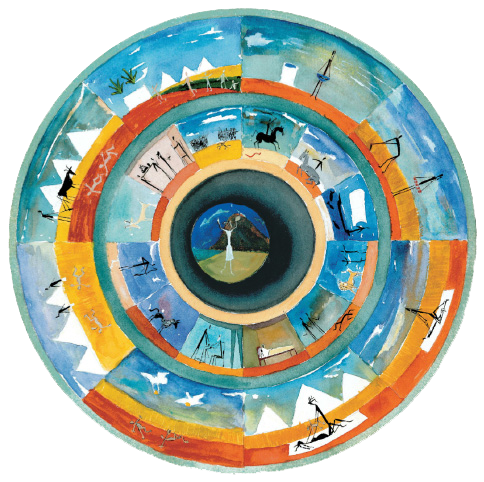 How the Story of the Exodus Speaks to Jews, Christians, and Muslims:
An Interfaith Commentary and Passover Haggadah

Published on the web, Exodus Conversations is intended to encourage an international dialogue. It features side by side presentations of the story of the Exodus as presented in the Qur’an and in the Book of Exodus. This is augmented by the traditional Passover service with a notable difference. At sixteen junctures, three scholars — a Jew, a Christian and a Muslim discuss issues which arise from the text. The scholars are not and could not speak on behalf of their faith communities. Rather, they are offering their individual responses based on their experiences within those communities.

Question of the Week

Who are the strangers among us and how do we define them?

As Mary and Muhammad observe, strangers are those who are different. But when the Bible speaks about how to treat the stranger, literally, “the sojourner,” it often does so in conjunction with the orphan and the widow. “For the Lord your God . . . shows no favour and takes no bribe, but upholds the cause of the fatherless and the widow, and loves the stranger, providing him with food and clothing. You too must love the stranger, for you were strangers in the land of Egypt” (Deuteronomy 10:18-19). It was easy to treat strangers, widows and orphans poorly. They were isolated and often unable to defend themselves. So the stranger is not only “other,” but one who by virtue of being different is less equipped to fend for himself or herself. In focusing on the stranger along with the widow and the needy, the Qur’an seems to share the Bible’s concern. Who are the defenseless and the easily exploited in our society today? The list is too long.

But the Bible also reminds us that we are all strangers, temporary sojourners. God says, “. . . [F]or the land is mine, and you are but strangers, resident with Me” (Leviticus 25:23). Muhammad makes the same point. When we forget that in a sense we too are strangers, we push God out of our world. An 18th century Hassidic teaching put it this way: “If we act as gerim [strangers, sojourners] in the world . . . then God will be a permanent resident among us . . . But if we act as permanent residents . . . then God will at best be a ger [stranger, sojourner] among us.”*

In a broad sense, strangers are people whom we do not know. Yet “strangers” often connote people who are “alien” or “foreign,” that is, persons who differ from us in some significant way. They may speak a language we do not understand, have a skin tone different from our own, follow customs anomalous in our own culture, or hold religious beliefs we do not. Strangers, then, may unsettle us because by their very existence they suggest that our view of the world is not the only view, that our perspective on reality is just that—a perspective. Strangers unveil our tribalism, our provincialism. Strangers threaten any assumption that God is only on our side.

The gospels of Mark and Matthew contain a fascinating story about a stranger—a Canaanite woman, a Gentile—catching Jesus unaware.* She approaches him, shouting, “Have mercy on me, Lord, Son of David; my daughter is tormented by a demon.” Matthew writes, “But he did not answer her at all,” and Jesus’ disciples urge him to send her away; apparently, her bold approach and yelling are unseemly. Jesus, too, appears taken aback, and responds to her, “I was sent only to the lost sheep of Israel.” The exchange continues:

But she came and knelt before him, saying, “Lord, help me.” He answered, “It is not fair to take the children’s food and throw it to the dogs.” She said, “Yes, Lord, yet even the dogs eat the crumbs that fall from their masters’ table.” Then Jesus answered her, “Woman, great is your faith! Let it be done for you as you wish.” And her daughter was healed instantly.

As both Matthew and Mark tell the story, Jesus initially shows a less-than-edifying attitude toward the Gentile stranger. Yet the stranger is intrepid, and her clever retort elicits not merely acquiescence, but praise. She not only wins the argument, but overcomes Jesus’ reserve toward a stranger.

The various stories in the gospel are richly textured and resist literal renderings. Much more might be said to unlock the riches of this account. Yet one layer suggests that Jesus’ unexpected encounter with a stranger—a Gentile and a woman—revealed that his parochialism needed to be stretched.

Particularly in the wake of September 11, 2001, many Christians revealed an ugly xenophobia. Intolerance of the “other” continues in fiery anti-immigrant rhetoric. Perhaps reflection on this gospel story might lead today’s disciples of Jesus to consider how the stranger might teach them.

The stranger could be a person of a different faith or from a different ethnic or a racial group or from a different social class. It is amazing to notice in social gatherings people look for familiar faces to join them. Celebrating the anniversaries of the Center for Interfaith Studies and Dialogue, I try to mix people at the dining tables but there are many who prefer to sit at the table with their own people. Many would not go to a party where some faces are not familiar.

The Qur’an calls for respecting and extending a helping hand to all strangers: “And worship God [alone], and do not ascribe divinity, in any way, to aught beside Him. And do good unto your parents, and near of kin, and unto orphans, and the needy, and the neighbor from among your own people, and the neighbor who is a stranger, and the friend by your side, and the wayfarer, …” (4:36). Any person with whom we come in contact, whether a stranger or not, must be treated with respect and kindness. On one occasion, Prophet Muhammad asked some people: “Is there any stranger amongst you?” They said, “No except the son of our sister.” Allah’s Apostle said, “The son of the sister of some people belongs to them.”* The Prophet meant that the stranger should be no more treated as a stranger but as one belonging to them.

Many times strangers are not received with open hearts, but rather poorly treated. People in pre-Islamic Arabia discriminated between races and different social classes. When Islam asked its believers to stand shoulder to shoulder in straight lines during the daily worship in Islam, the rich, the masters and the tribal leaders of the pre-Islamic Arabia refused to enter the new religion, objecting to the concept of equality in Islam.

Islam stands for one people under one God. All people are children of Adam and Eve in Islam. The division of people in different colors, races, tongues, cultures and faiths is intended to help know each other better by building relationships and not treating others as strangers (49:13).

Strangers constitute a minority in the community. The stranger may be from one’s same ethnic group or race but different from the rest because of his or her religion. Strangers are also those who rectify what other people ruin. Talking about Islam, Prophet Muhammad said that Islam started as a stranger, with only a few people believing in it, and it will eventually go back to being a stranger as it started, with only a few people adhering to it, so it is important give glad tidings to the strangers. When his companions asked who these strangers were, the Prophet said they were those who maintain themselves upon righteousness when people become corrupt.*

The word for stranger in Arabic is Ghareeb. In one sense, we are all strangers living in this world. Abdullah bin ‘Umar said, “Allah’s Apostle took hold of my shoulder and said, ‘Be in this world as if you were a stranger or a traveler.’” The sub-narrator added: Ibn ‘Umar used to say, “If you survive till the evening, do not expect to be alive in the morning, and if you survive till the morning, do not expect to be alive in the evening, and take from your health for your sickness, and [take] from your life for your death.”* The abode of God alone is permanent; therefore, living as a stranger in this world leads to a righteous life and makes us capable of pleasing God and being blessed.

Praise and blessing to you, Oh God
Creator and sustainer of all,
Who has brought us together
To know one another in peace